I thought I’d share my Dad’s (@bikeral72) piece that he wrote for his local magazine.

I got him into Twitter, infact I think he has tweeted more than me, occasionally with me having to say, ‘Dad, you can’t say that 😉 I think that falls on deaf ears, he doesn’t do FB, he can’t stand it , and now more & more often he is writing for magazines & newspapers & forums.  From his Twitter tag you won’t be wrong in thinking he is a rider and at 72, he still cuts a dashing figure in his leathers ;).

Well done Dad, keep it up !

We had such fun.

It only let us down once when it dropped an exhaust valve. I managed to get another valve brand new off the shelf at P.J.Evans in Birmingham for the princely sum of 8 shillings and sixpence. The car was parked on the central reservation of the Tyburn Road in Erdington, Birmingham, this stretch of land used to be where the trams ran. I stripped the engine down, replaced the valve got it running again, with traffic buzzing passed while I worked.

We then had more than a few years motoring out of it, going all over the country. 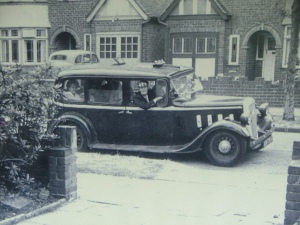 The photo shows the car with me in the driving seat, with the obligatory black and yellow checked cap, which we all had.

Our old car finally came to an end when an excursion up a curb put paid to the front suspension. It was, alas, beyond a viable repair, so it had to go to the scrap yard.

A few months after we had parted with the car, the M1 motorway was about to be opened. Being the first motorway in the country, Joe Public had to be educated as to what sort of vehicle could, or could not, use the motorway. There were television adverts at news times telling people of the woes of travelling on the new motorway, and as an example they showed a picture of our old Austin 18 Taxi, saying, this is the sort of vehicle that we don’t want to see on the M1. So right to the end, that old car had a tale to tell.

Hope you find this of some interest, memories of this era never seem to fade.