For 13 years, I’ve looked in awe at the mighty ‘Maroma‘ standing majestically above the lake. The highest mountain in the Axarquía in Southern Spain at an altitude of 2069m. La Maroma meaning rope was named after the rope used to descend to an ancient ice house located near the summit.  I always hoped one day I’d be fit enough and brave enough to climb to the summit, well yesterday was that day!

I felt fit enough, after my last few months of non-stop hiking, but the bravery part was a more challenging aspect.  You see I suffer from a crazy level of acrophobia, heights, and edges, push me over the edge literally ;).

Over the years I have been paralysed to the spot, clinging to any solid object, building, tree or person trying to escape the magnetism & pull of the edge.   During my career as an overseas tour guide, I would create little white lies to tell clients when we arrived at monuments, towers, and bridges, that as their guide I must stay at the bottom for safety and their security, so they always knew where I was.    One time we visited the Gran dune de pilat in France, the family and I and hundreds of other tourists, started the trek up the dune, and half way up I knew I was just not going to make it, the single file line as far as the eye could see, had to stop, reverse and trek back down, with a sobbing me, erratically bumping down on my bottom, until  I could reach the solitary oak tree to hug and hang on to.  On occasions, I have this sudden bout of Tourette’s style shouting at strangers who are near edges too, all very embarrassing for anyone with me and totally debilitating to me.

So I think you get the picture, this climb wasn’t to be taken likely, I had researched, I knew there were parts that would push my buttons.  No way did I want to trek for upward miles, only to not get to the summit.

So yesterday arrived, our rucksacks were packed, heavy with litres of water and high energy snacks.  I was already awake and had been most of the night, when the alarm went off, going over every situation in my mind, and trying to inject a PMA, along with positive affirmations, “cool wet moss’ that I used for my Tony Robbins ‘Fire Walk‘, years ago, wasn’t going to cut it, but ‘Onwards and upwards’ might help. 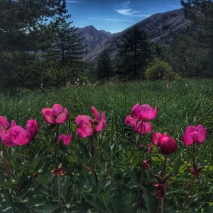 We had decided on taking the route from Robledal, not the shortest but most picturesque. The weather was perfect, not too hot, clear skies and the season too, springtime in the mountains is stunning, wild flowers, butterflies, grasses and lush vegetation, make the long journey so pleasurable.  Once parked, we started the trek, firstly winding away up through the oak and pine forest to the first vistas looking to Sierra Nevada and the lowlands of Granada.  The track then steeply ascends, on rocky paths some very narrow with steep downsides.  Watching our footing constantly, it was best to stop often for quick breathers and a moment to take in the views.  The path is easy to follow, and when the signposts fade out, piles of stones have been made to show the way.

The journey was as hard physically as I’d expected but doable, especially for regular walkers.  Walking poles were a godsend, especially on our descent.

So the mental part….there were many moments when I thought OMG, and couldn’t bare look and when my pace and stride were slightly comical as I shuffled over various rocky crags.  I knew THE challenge was near the summit , a 10 meter long very narrow precipice with a sheer drop to below a 1000 + meters below !!!!  I’d asked my group not to mention it, and when they saw it before me not to comment, but I was constantly saying “Is this it ? are we there yet ? do you think that was the worse part ?” . Then there it was no mistaking THE EDGE OF DOOM.  Palpatations, heart in mouth, hot sweating, I focused, clinged on to the Other Half, ‘C’mon Lynsey it’s only 10 large steps’ I said to myself.  Slowly, slowly I edged across, I’m not sure where I looked, not up, not down, I may have even had my eyes closed, not recommended. The other issue that now dawned on me, half way across, and why I hadn’t thought about it before, I was going to have to do it again on the return journey.  Get across I did, did I enjoy it ? NO, but the relief was enormous and once I’d regained some sort of composure and fought back my tears, I realised of joy.  I was bloomin’ well proud of me !

The summit was breathtaking, views of snow laden Sierras, the lake below, boats at sea, Malaga port in the distance, white washed villages and our hamlet over yonder.  The temperature had dropped and the air was crisp,  we snuggled together in a low huddle for our picnic, reveling too with other climbers of all nationalities and ages.  We enjoyed a celebratory tipple, which helped calm my nerves and give me a little dutch courage for the descent.  Photo opportunities were taken and Maroma captivated me.

Making our way down was as hard if not harder, muscles and feet took the brunt, but our minds were jubilant and our conversations were cheery.

6 hours 45 minutes it took us, including pit stops, the last part seemed to take forever, us all thinking we must be nearly there, but then sure enough the car came into view and we knew the bar was only a short drive away 😉

Have I conquered my fear, definitely not totally, but I felt the fear and did it anyway.